Check out my new post today on www.girlsheartboooks.com. It’s all about the amazing exhibition I took the family to at the Tate Modern.

At last! Here it is …. That competition I’ve been promising you. (edited version)

It’s called The Girl in the Picture and it’s based on a couple of workshops I did earlier this month. You have to write a short story, or the opening of a book, or you can do an illustration of a book cover or even a trailer of a book …

YOU HAVE OPTIONS, PEOPLE! OPTIONS!

It just has to have ‘The Girl in the Picture’ as its title. Oh, and it can be comedy or romance or horror or whatever you think it should be. Just make it exciting, and intriguing, and make me want to know more. If you’re writing, it’s max 1000 words.

You can enter as many categories as you like, but just one entry per category please.

You’ve got until 28 November to enter and the winners will get advance copies of my new book The Look (which is OFFICIALLY the most beautiful YA book coming out next year. As judged by ME.) as well as a bunch of other stuff. All the details on prizes and how to enter are on the Threadsthebook website, here.

Good luck! Have fun! And happy half term!

Threads has come out in Poland, and they’ve called it ‘Projekt C’. Which I love. There is indeed a ‘Project Crow’ in the book, and it’s very important. I wish I’d had the idea of ‘Project C’ when various people who didn’t like ‘Threads’ as a title wanted an alternative. It rocks.

Oh, and the cover. I adore it. It’s the edgiest cover so far, and therefore one of my favourites. Something about the way that thumb is tucked into that pocket suggests the girl on the cover means business. You wouldn’t want to mess with her. And the background? I instinctively loved its mathematical messiness, but on close inspection it looks like industrial pattern design. I guess you’d program a machine to tell it where to cut.

Thank you, Egmont, for the amazing work you did on this. You’ve made an English author very happy. I can’t wait for my own copy, so I can see what Nonie, Crow and co get up to in Polish. Project Big Success, I’d say.

Want to see how I imagined the setting for the climactic scene of the new book? Exactly? Look behind Beyoncé here.

Believe it or not, there is more to writing than simply sampling lots of delicious cake when visiting schools and talking about what you do. However, that can be quite a major part of it sometimes, and I have no problem with that.

A couple of weeks ago I revisited St Mary’s School in Colchester, to open their new junior school library, and this is what was on offer afterwards:

Reader, I had three. I needed the energy while I was signing. They were accompanied by two delicious cups of tea. St Mary’s rocks.

Not only was there cake, there were paparazzi (well, there were 2 photographers from the local press, anyway), and so here are a couple of pictures of the library opening itself. (I mean me opening it. Obviously it did not open itself.) Yes, there really was a ribbon, and yes, I really did cut it. And yes, it was really good fun. The girls were all brilliant and there was lots of enthusiastic cheering. Kate Middleton’s going to have a ball for the rest of her life. 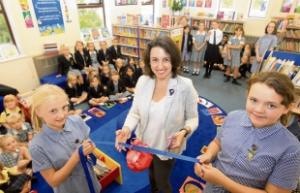 (We moved the ribbon for the sake of the pictures. Believe nothing you see in the press. Well, almost nothing – the library looks warm and welcoming in the pictures, as indeed it was in real life.)

Before the ribbon, and the cake, I gave four talks. Four is quite a lot to do in one day without repeating yourself, so I cheated early on and got the Year 8 girls to do a write a story/draw a picture workshop, where they had the choice of starting a story with a title I gave them, or drawing what the front cover of the book would be like.

And we had FUN. Serious fun. Those book cover designs were amazing. They were scary and intriguing, beautifully drawn and just as interesting as the stories themselves. Which is why I’m going to pinch the idea for the competition I’m going to run shortly on the Threads website. (Don’t worry – when it’s ready I’ll announce it here.)

Each year group is a different experience, and I love them all. Year 6s ask the most unpredictable questions, Year 7s are often the keenest readers, and Year 9s are the coolest. They way out-cool me. By the end I was the lady in the corner, signing books and stuffing myself with cake and just happy to be there.

Lots of girls were regularly writing their own fiction. For them, I recommend the Young Writers Program of the now famous ‘NaNoWriMo’ organisation : here. NaNoWriMo stands for National (but now international) Novel Writing Month, but as it happens in November, I always assumed that the No stood for November, and a part of me still thinks so. The idea is simple: write a novel in a month. Just set yourself a wordcount, use the website to help if you like, and get going. You can do it! You really can. It may not be perfect, but it’ll be a story you’ve written from start to finish, and maybe the foundation of the work of art that will make you famous.

If you’re entering, good luck. And don’t forget what awaits you if it all works out …

Cake. And lots of it. What are you waiting for?

The one when the doorbell goes and it’s a nice man with a big brown box and in it are … lots of copies of your new book. Loads. The first time you’ve seen them in quantity, like a proper, published book …

Here they are in the box:

And here they are stacked up on the dining table for me to sign. (We’re giving booksellers and reviewers the finished version to look at, rather than a typical ARC, because they are so GORGEOUS. Look at those page edges. Like I said – GORGEOUS.) 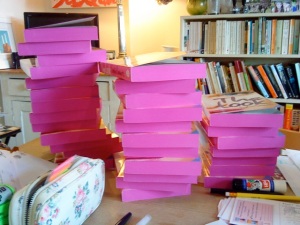 So I’ve spent the morning signing and trying to draw a cute little picture of an eye under my signature. And I have learned, in the process, that one of the many things I can’t draw very well is eyes. So if you’re reading this and you happen to receive a signed copy from me and you’re wondering what the weird blob is under my signature – it’s an eye, OK? I tried.

Now I have to send them back, and I guess I won’t see them again until spring, when The Look comes out, and the only thing that will keep me going until then is writing the new one.

Which is hard, by the way. Very. One of the lovely things about this weekend at the Cheltenham Festival was sitting on a panel next to Melvin Burgess (that would be Carnegie Medal-winning Melvin Burgess to you and me), hearing him say that it never gets any easier. That was strangely reassuring. At least it’s not just me.

If you came and saw us at Cheltenham, I hope you had a good time. Tell me what you thought. And if you wore a sparkly outfit, thank you. (That wouldn’t have been to the event with Melvin – I don’t think he does sparkly. That would have been to the one with Joanna Nadin that we did the next day.) And if you were the girl in the sparkly top, lime green tutu and leggings, a la Crow, THANK YOU, and thank your big sister too!

Because writing may be hard, but meeting fans of the books who enjoy them so much they get their little sisters to dress up as one of the characters makes every single minute of it totally worthwhile.

Have I ever mentioned that I love my job? 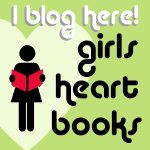